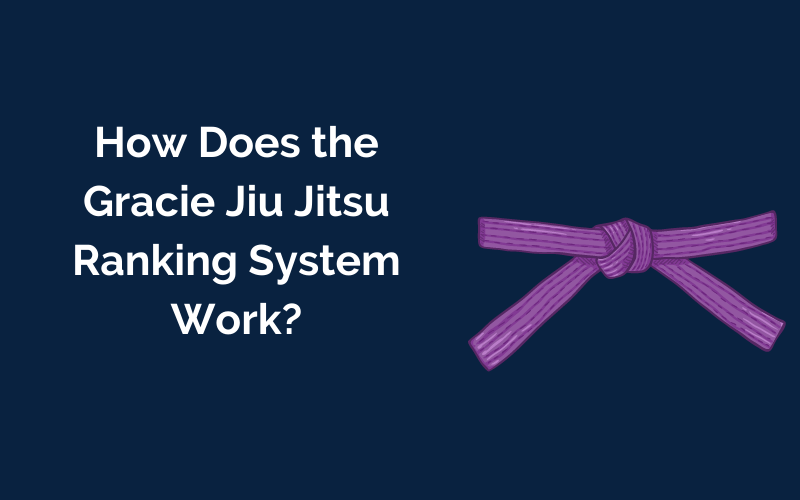 How Does the Gracie Jiu Jitsu Ranking System Work?

The Royce Gracie Jiu-Jitsu ranking system involves different coloured belts. There is a youth belt system, for ages seven to 15,  and one for adults, aged 16 and over.

The ranking system is progressive. As you progress, you can move up with a series of promotions at each stage. The rank you achieve in Gracie Jiu-Jitsu is not just an indicator of your level of skill, but also your moral character as a Jiu-Jitsu practitioner.

Each coloured belt that a Gracie Jiu-Jitsu student wears consists of a horizontal colour, or colour combination. On the belt there is also a solid bar. When someone starts to progress within their colour rank, they can earn a stripe, which then goes on this solid bar. Generally, a student will need to earn four stripes before they progress to the next full rank, which will mean a different coloured belt.

However, a student may also be promoted to the next full rank without having to earn all four stripes, depending on the skills and attitude they’re able to demonstrate. Rankings are not down to strict qualifications, or meeting curriculum requirements. Usually, it’s at the instructor’s discretion when to award a stripe, giving promotions on a quarterly basis.

In adult ranks, students may have to meet required levels of proficiency in certain techniques before an instructor will consider them for stripe promotion.

History of the Belt System in Jiu-Jitsu

It was the founder of Judo, Jigoro Kano, who first introduced the black belt system at his Kodokan martial arts school, back in 1882.

The story is that he was inspired by Japanese high school swimmers, who wore black ribbons around their waists when they had reached advanced status.

This system was literally black and white: white belt students were beginners, black belts were worn by those who had mastered the key techniques of judo.

In 1952, the introduction of the Gracie Jiu-Jitsu belt system was based not on martial arts skill but on instructorship. Students who took and passed instructor courses wore light blue belts. Other students, even accomplished ones, wore white belts.

Instructors who went on to become professors then wore dark blue belts. It wasn’t until 1967 that Gracie Jiu-Jitsu introduced black belts.

The bar system distinguished Gracie Jiu-Jitsu from other martial arts. For example, students could achieve a black belt with a white bar without becoming instructors. But students training as instructors would wear black belts with red bars.

Nowadays, Gracie Jiu-Jitsu academies award various colour belts to both adults and children. This helps motivate students, giving them different goals to aim for and achieve as they progress.

The youth belt system applies to students aged seven to 15, though instructors may not award certain belts until students reach a certain age.

By having this many colours, instructors can award junior students more frequently, which is a simple and efficient way to build and reinforce their self-confidence. There’s a basic schedule of promotions, and all belts can receive a maximum of four stripes. There’s no guarantee of promotion. Students must display sufficient progression to do so. But the 10-belt system gives students plenty of scope to develop at a pace that works for them.

Once a student turns 16, they’re eligible to progress to the adult ranking system. Promotions have a similar criteria to the junior rankings, but typically adults will spend longer at each stage, with promotions occurring less frequently.

An adult student who has progressed from the junior system will start at blue. A student who is beginning their training as an adult will wear a solid white belt.

Students then progress through the adult Gracie Jiu-Jitsu Rankings to reach black belt status. There are various levels of black belt, including a white bar for students who aren’t instructors, and a red bar for those who are. More advanced black belt ranks include Coral (named after the black, white and red coral snake), and solid red belts.

The different rankings students can achieve act as powerful motivational tools in Jiu-Jitsu, helping students mark their own progress and giving them a clear reminder of their progress every time they attend a martial arts class.

For more information, please get in touch.