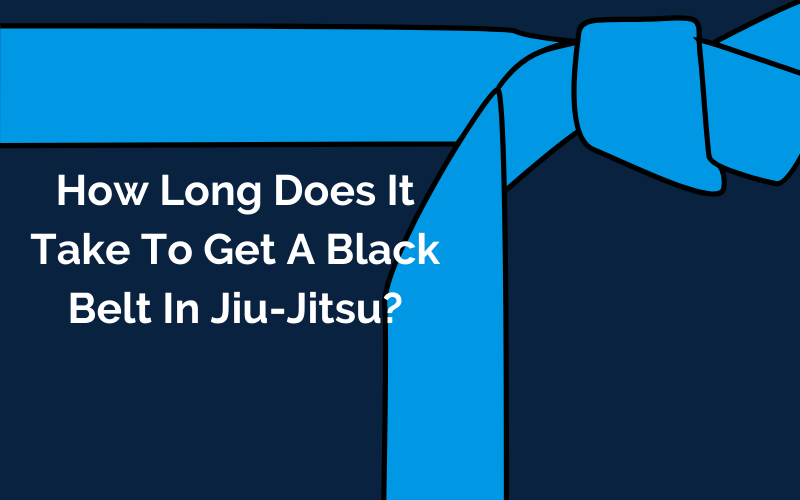 How Long Does it Take to Get a Black Belt in Jiu-Jitsu?

In Royce Gracie Jiu-Jitsu, the black belt sits near the top of the ranking system. The only belts beyond it are the more advanced grades, known as coral and red.

Because the black belt represents the summit of Jiu-Jitsu achievement for many, students, or prospective students, want to know how long it takes to get a black belt in Jiu-Jitsu.

There isn’t one definitive answer, because a student’s progression through the belt rankings very much depends on their individual capabilities. The colour of each belt demonstrates the level of proficiency you’ve reached. The more rapidly you progress, the closer you’ll get to achieving a black belt.

What are Jiu-Jitsu Rankings?

Jiu-Jitsu isn't something you can rush. It isn't designed to be a crash course in self-defence that transforms you into an expert in martial arts overnight. It demands long-term commitment and self-discipline.

The Royce Gracie Jiu-Jitsu belt ranking system is extensive, beginning with junior grades and moving on to adult belt colours.

At junior level, there are far more colours to work through, starting with white and finishing with green.

In between these two grades, the youth belt system has eight stages to progress through. There’s a good reason for this. It enables the instructor to award students more frequently, which helps to motivate them, and enables them to experience a clear sense of progress and achievement.

At 16, a student can progress to the adult belt system. Generally, you’d expect adult Jiu-Jitsu students to spend longer at each stage. Adult belt colours begin with white and progress, via blue, purple and brown, to black. Beyond the black belt ranking, there are further belt colours, coral (black-red, white-red) and red.

If you're an adult student starting for the first time, you'll begin at white. But if you've progressed through the junior belt system, you should start at blue belt level.

A key feature that distinguishes Royce Gracie Jiu-Jitsu rankings is the stripe system that’s applied to the different coloured belts.

For each coloured belt grade, a student needs to earn stripes, which sit on the belt vertically, showing the student's progression within the grade.

Usually, a student will need to gain four of these stripes before moving on to the next belt colour. But in some circumstances, they may get promoted to the next rank without needing to earn all four stripes.

The ranking system is progressive, but not tied to strict qualifications. It isn’t a curriculum-based form of training.

In the adult belt rankings, however, there are certain levels of proficiency the student will need to show in various Jiu-Jitsu techniques, to then move to the next level. The instructor’s judgement is the main thing that determines the individual’s progress.

How Long Does Jiu-Jitsu Training Take

In the junior ranks, you may progress fairly swiftly, depending on your skill and self-discipline. You might progress through the stripe systems every three months, for example, but there is a recommended minimum age for some grades.

The top junior grade belt, green, has a minimum recommended age of 13. When moving from junior to adult grades, the blue belt has a minimum age of 16. Therefore, even if you achieved green by age 13, you would still have to wait to progress further.

Adult training takes longer because there are fewer belt colours to go through, so each stage is more extensive and demanding in its requirements.

If you’re an adult beginner, you start with a white belt and learn the fundamental skills that earn you the Combatives belt (white with a navy stripe running through its centre). Normally this takes around 12 months.

Thereafter, you can expect to train for around two years at each coloured belt stage.

At blue belt level, you should be comfortable using all positions on the mat, including basic self-defence, showing confident levels of health and energy, and a willingness to advance.

The purple belt is more demanding, as you approach elite level in your training. You must learn to spar effectively in all positions and have a fluid defensive and offensive technique.

Achieving a brown belt shows you have mastered advanced skills on the mat, including 65 specific defence tactics and techniques.

Finally, there’s the black belt, indicating that you’ve progressed successfully through all the stages of Royce Gracie Jiu-Jitsu.

• You learn as you progress, and Jiu-Jitsu can give you a hugely satisfying ongoing sense of achievement and purpose, that’s not just restricted to reaching black belt level

• Black belt embodies a whole lifestyle and philosophy that goes with the skills you learn, and therefore you shouldn’t expect a quick fix.

How long does it take to get the black belt? It could be eight years, or ten. But along the way, you’ll gain an enormous amount skill, self-discipline and self-confidence.

Jiu-Jitsu training is not just about getting the black belt, it’s about developing valuable and rewarding skills for life.

Discover more about self-defence training and the lifetime benefits of learning Jiu-Jitsu. Please get in touch.