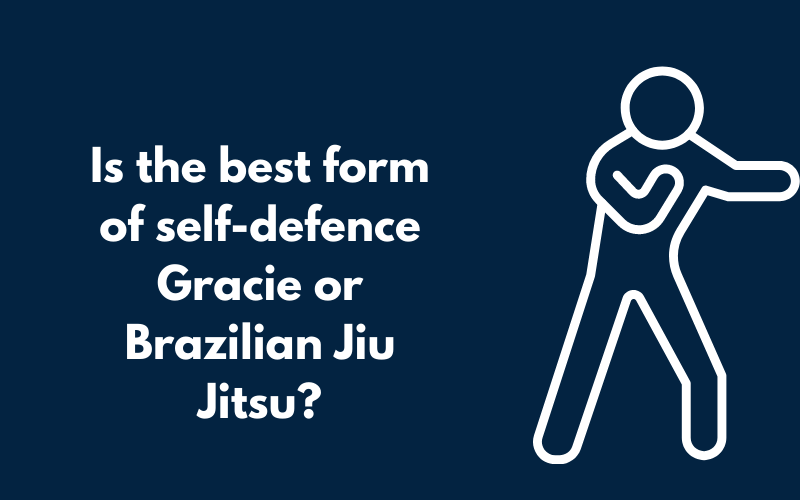 Is The Best Form Of Self Defence Gracie or Brazilian Jiu Jitsu?

Whilst there’s no noticeable difference from the outset, they do have some differences. Gracie Jiu Jitsu is best suited to a situation where the person is needed to defend himself and prevail, whereas Brazilian Jiu Jitsu is taught more exclusively to be used in a sport setting.

Each situation is equally as important to know how to defend yourself but applying either Gracie or Brazilian Jiu Jitsu will not just be an indication of your level of self defence but will also showcase your knowledge of the challenge in front of you.

Firstly, I’d like to say that Gracie Jiu Jitsu and Brazilian Jiu Jitsu originate from the same source, they both consist of the same submissions, controls, sweeps and escapes. The main difference is the way your coaches teach and the academy’s training focus.

Brazilian Jiu-Jitsu academies throughout the globe focus their teaching and training methods on the sport of Jiu-Jitsu, however, Gracie Jiu-Jitsu is the continued learning of self-defence.

Gracie Jiu-Jitsu, or the original version as it is referred to today, is widely known for self-defence being its main focus and a martial art second. When it originated, it was never perceived as a sport. This principle is surprisingly the biggest difference between the two.

Students learn the basics of self-defence which consists of shortening the distance, the blocking of punches, clinching and takedowns for the control of your opponent.

In a real-life situation, your opponent could be any shape or size, so developing these techniques will allow you to be confident of leveraging your opponent, rather than being of disadvantage to them because of differences in strength.

Once you’ve got to grips with the fundamentals, that’s when you combine the sports aspect of Jiu Jitsu.

The power of self defence is knowing that you can look after yourself, and the power to end any encounter or fight when you desire.

The complete opposite to Gracie Jiu Jitsu, Brazilian Jiu Jitsu is exclusively taught as a recreational sport. Then, as you progress, you will compound the self defence focus of Gracie Jiu Jitsu.

Brazilian Jiu Jitsu has evolved to a sport-based skill that was built on the aspects of self defence (Gracie Jiu Jitsu). Like all fighting organisations, there’s a points-based system making it a much more complex art but makes it extremely fun to train.

But the question I know you want answering, who wins in a match up?

This is a debate I don’t think will ever be settled. How can you compare a real-life scenario to one that is calculated in a point-based system? Finding something tangible to test the two would be difficult.

What I would like to finish on is Brazilian Jiu Jitsu is best used for a sport setting, only Brazilian Jiu Jitsu can defeat itself. While Gracie is still a very good art to possess, the environment of point gaining and stalling strategies doesn’t suit it.

On the other hand, Gracie Jiu Jitsu is perfect for a street fight setting. Yes, Brazilian Jiu Jitsu would still help you but with the variety of arsenal, it would make it a lot less effective in a pure self defence scenario.

Our main focus here at Ellis Academy is self defence. Our programme is based on Royce Gracie Jiu Jitsu, with easy fundamentals and instinctive movements, our system is designed for a real-life scenario and we aim to teach it in the shortest possible time.

Our academy is situated in Surrey, to find out more about our self defence programme and the real-life benefits of learning this ‘gentle art’ then don’t hesitate to get in touch.