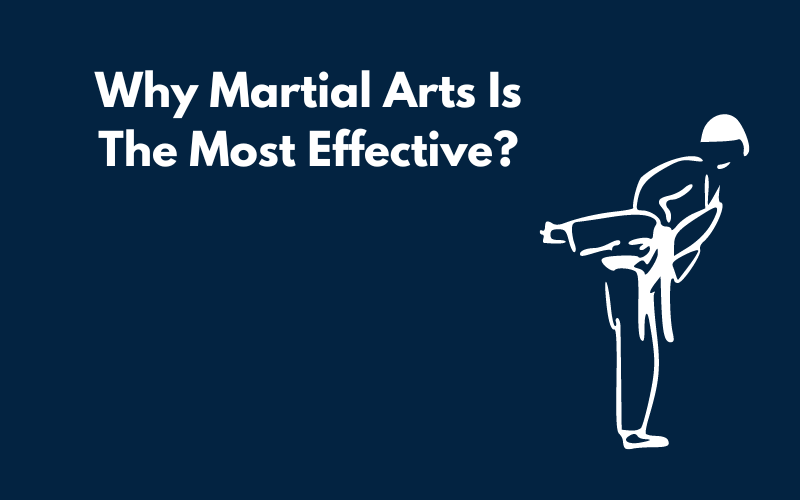 Why Martial Arts Is The Most Effective?

Whether it be karate, jiu-jitsu, or mixed martial arts. We want you to know why martial arts is the most effective practice. This blog aims to uncover the main advantages of martial arts and what makes them effective.

As we are aware, martial arts training hosts many health benefits for an individual, but why is it the most effective. Let’s take a look.

But what sets martial arts apart from other sports? Martial arts is an exercise form like running or swimming; sure it offers a full-body workout impacting one's physical health, but there is also a direct link between martial arts and mindfulness and self-control – making it more effective than other sports.

It’s bizarre to think that an expression of self-defence and learning to fight, can be so closely linked to calm and focus. Martial arts are often misrepresented as fighting, instead, it is a gentle art which teaches one to be in control both physically and mentally.

There are several advantages to martial arts.

Practising and improving a skill is a confidence boost for both children and adults. With learning a new skill comes improvement, and with martial arts, often comes a ranking where students can progress, improving their technique and self-esteem.

Martial art is usually a solo sport, which allows students to focus on themselves and their improvements.

As touched on previously in this blog, martial arts come with an abundance of physical health benefits. A typical adult session can burn more than 500 calories. Martial arts can improve cardiovascular health, flexibility and strength.

It isn’t popular for a sport to offer you useful, sometimes lifesaving skills to replicate on the street. Martial arts come with techniques and manoeuvres that can be replicated in situations of real threat.

Martial arts are the most effective due to their ability to be used for self-defence in dangerous or life-threatening situations.

Sure, martial arts is often a solo sport, however, grappling techniques in jiu-jitsu, usually require a partner. Despite the practice, martial arts are often practised in a team environment, allowing students to build on their social skills.

It isn’t only children who need discipline. Many adults require direction and routine in life. You can find that in martial arts! Ignoring distraction, being immersed and listening is vital for students’ safety.

Self-discipline taught in class can be reflected in other areas of life.

There are several different forms of martial arts – all offering different benefits that will be effective for you.

You can read more on different styles of martial arts here.

In a nutshell, martial art's ability to aid fitness, self-defence and spiritual growth are all key advantages which make martial arts the most effective practice. Martial arts is a practice for anyone – due to the nature of the techniques, no matter one’s size or strength, they can reap the rewards of practising martial arts techniques.

At Ellis Academy, we believe in the effectiveness of martial arts and strive to “help parents raise confident leaders and adults reach their true potential”